2016 was a banner year for us in many ways, with so many shows at so many venues, several festivals, a whole bunch of jams with so many talented people, and some especially memorable shows with several world-class musicians who we brought over from Italy. 2017 is shaping up to be equally exciting! Please Like us on FB and check our Tour Dates page regularly for upcoming shows!

Italian rock violinist Andrea Di Cesare came back to Binghamton, this time accompanied by guitarist/singer-songwriter Pier Cortese (also from Rome). They both played several shows with Voodoo Highway; scroll down for details or check out the FB Event Page. A highlight was a last-minute addition to the schedule which had Andrea playing the National Anthem at the Owego Veterans Day celebration. Other highlights included–well, just about every show we played with them while they were here! Till next time, Andrea and Pier!

The second festival we organized this summer, the Rock and Roar Music Festival, was held at the fabulous new amphitheater at the Ross Park Zoo, on Sunday of Labor Day weekend (9/4).  It featured a full day of music, about a dozen local artists/painters, plus food vendors and more. For details, check out the Rock and Roar Festival on Facebook, and for pics, check out the album on FB. Can’t wait for next year! 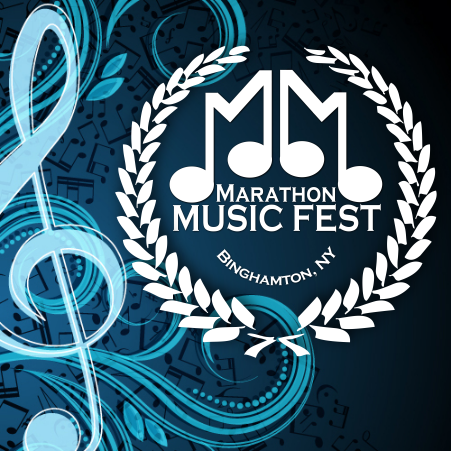 Marathon Music Fest was a blast! The first of two music festivals we are organizing this season took place in Binghamton on Sunday of Memorial Day weekend and featured over two dozen acts in over a dozen venues along the route of the Herald of Victory Marathon and Ride for Life 26.2 Bicycle Tour, as well as one heck of a party at the finish line (with a microbrewery festival and live music all day). It was so much fun to rock our city alongside so many of our region’s great musicians. And we got awesome feedback from the runners and cyclists who said that despite the fairly brutal high temperatures, this was one of their favorite marathons ever! We are thrilled to have been a part of their great experience. Here’s just one pic, but for about 100 more check out the photo album on Facebook.

We are happy to announce the awesome lineup for the music festival we’ve organized and that will be taking place this Saturday on the Binghamton University campus. If you’re within striking distance, join us Saturday from 2:30-7:30 on the main field at Mountainview College, up the hill on campus.

“Walmart Killed Main Street” is our latest song to hit the Top Ten on internet radio station WOSR! It is our sixth song to reach their Indie Top 10, joining “Been a Long Time, Baby” (which spent 5 months at #1), “Bad Girl,” “I Land on my Feet,” “Don’t Go Lookin’ for Trouble,” and “Why.” each of which hit the countdown in the last year. We are so thrilled!

We have been very busy this winter and early spring running a weekly jam at Binghamton University (where Dana is an Italian professor). So much fun! Check out the Jam’s YouTube page for highlight videos, and if you’re affiliated with the University and want to join us, you can find all the details at http://mountainviewjam.com or on the Jam’s FB page. 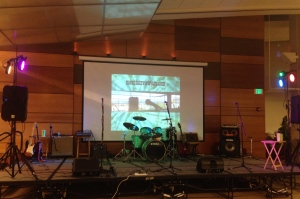 We are so excited about this song, which we debuted in September, and are especially thrilled that it has gotten such a great reception so far everywhere we’ve played it!

Bob and I (Dana) wrote it on the way back from Tennessee, inspired by the great time we’d had down there at a gig. Here’s how the relevant events of the evening went.

The Acoustic Coffeehouse, in Johnson City, TN, is a great little place for live music. This was our second time playing there, and we were really excited to be back. The crowd was so into the blues—they loved our originals, and they loved the classic blues we played as well. What surprised us the most was probably that pretty much the whole bar sang along to a Bo Diddley song that we have been playing out for like a year and that we’d never seen even one person know the words to. Here was a whole bar full of people singing along. We loved it.

On the set break, Bob and I went out to the van to debrief…ok, and to have a little whiskey, which we were in the mood for. The Acoustic Coffeehouse has lots of great stuff to offer, but no hard liquor. So there we are sitting in the van, in the parking lot, I’m taking a swig of whiskey from the bottle, and this kinda crazy-looking guy comes up to the window and wants to say something to me. I’m a little apprehensive… who is this guy and what does he want…and are we gonna get in some kind of trouble for drinking in the parking lot… but I roll the window down a little, and he says, “You can’t be drinking that whiskey out here”–and at this point we are feeling a little worried, but he’s not done with his sentence, which ends like this: “without giving any to me!” Bob and I laughed and I figured I guess I’d better give him some, so I did, at which point he said, “You should bring this back inside when you go on again.” I’m thinking, this guy really is nuts. Bring a bottle of whiskey into a beer joint?! Either he’s off his rocker or he knows something we don’t. “Won’t we get in trouble?” I ask. “Nah,” probably-crazy guy replies. “I’m the manager.” OK! Not really crazy after all, just an enthusiastic and fun partying kind of guy!

So, we brought the whiskey inside (and shared, of course), and continued with our awesome evening. At some point during the set break, Bob was back on the stage before I was, and when I joined him he told me “Hey, listen to this, I just wrote a riff…” I told him to hold on and I grabbed my phone so I could record it (when inspiration strikes, you’ve got to honor it!). I really liked it and agreed we should use it for something….

Fast forward to our way back to New York a day or two later… Bob is driving, and we are talking about what a fun night it was. Rehashing the story of the “crazy guy” in the parking lot who turned out to be the manager, and how extraordinarily fun both he and the entire crowd were, and how much they all loved the blues down there, and I said something like, “It was a great night of whiskey and blues.”

As soon as the phrase was out of my mouth, Bob and I both knew that we had to write a song around it. I’m not sure which one of us verbalized it first but we both just knew.

After talking over some different ideas, I got my laptop out and started writing…it was one of those songs that practically wrote itself. Our favorite kind! LOL.

As soon as we got home (it was early evening), we grabbed the guitars and headed to our back deck–we didn’t even bring the suitcases in–to try to work it up. We could not *wait* to get this song hammered out. The music practically wrote itself as well, based on the riff Bob had written on the set break at the gig. We had the whole thing written and recorded on my phone (again–we have learned to record things immediately, because we don’t always remember it all later!) before it got dark.

We debuted it later that week at a duo gig at Abel’s Pub, and soon thereafter worked it up with the band and have been playing it at every gig since. So much fun to write and play a song that people enjoy…. We can’t wait to record it for our next album!

Voodoo Highway all over the Top 10!
2014 started off with some amazing news for Voodoo Highway: We have THREE SONGS IN THE TOP TEN Indie songs of the YEAR on the WOSR (Live365.com) Top 50 of 2013 list. “Why” came in at #10, “I Land on My Feet” at #3, and “Bad Girl” at #2. And “Don’t Go Lookin’ for Trouble” came in at #24. We are thrilled that people are getting to hear our music on the radio; the fact that they’re requesting it and voting for it is an unbelievable bonus!

You can hear “I Land On My Feet” (which has been #1 or #2 in the monthly Top 10 for the last 3 months) on Internet radio, every Friday from 5-6 (EST) on WOSR’s “Women Who Sing The Blues” show, and that along with our other songs on WOSR’s 2013 Indie Countdown Show every Wednesday, Saturday, & Sunday from 3-7pm Eastern, from February 5 – March 2.  (Access the station at Live365.com/stations/breenoble)

We have our second NUMBER 1 song on Internet radio! “I Land On My Feet” just hit #1 on WOSR at Live365.com, on their listener-voted, monthly Indie Top 10. It joins “Bad Girl” which also topped the chart over the summer, and “Why” and “Don’t Go Lookin’ for Trouble”–which spent several months on the Indie Top 10. We are both humbled and thrilled by the response to our songs! And we continue to expand the number of stations (both FM and Internet) that are playing our music… You can hear “I Land On My Feet” on Internet radio, every Friday from 5-6 (EST) on WOSR’s “Women Who Sing The Blues” show. Our music has also been getting some airplay on local FM stations…  Deejays Joe Gabriel and Chris Kocher at WHRW (www.whrwfm.org) have been playing our songs, and so did Big Wally at Binghamton’s classic rock station WAAL 99.1-The Whale. The Whale is also airing our rockin’ ad song “50 Shades of J&R” every Friday morning as part of the station’s $50 gas-giveaway promotion. Listen on the web here, if you like.